High-temperature alloys are used in many areas of everyday life, for example in aerospace. In this field, high-strength nickel-based alloys are currently used predominantly. Corrosively and thermally high-stressed parts in the glass industry and synthesis chemistry are made of platinum-based alloys, such as glass fiber drawing nozzles and various catalysts. The working group "High Temperature Alloys" is concerned with the development, production and investigation of such alloy systems. 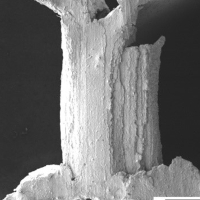 One economical way to reduce aircraft carbon dioxide emissions is to significantly improve the efficiency of aircraft turbines. One effective method is to reduce airflow leakage, especially between the rotating parts and the turbine casing. The most widely used seals in aircraft turbines for sealing the rotor to the stator are so-called labyrinth-honeycomb seals.

A wide variety of requirements are placed on labyrinth sealing systems. Of particular importance is the suppression of leakage. In addition, the fins of the rotating turbine blades should not wear out when they enter the honeycomb seals. The honeycombs, on the other hand, are given sufficient wear tolerance by small contact surfaces with the rotor.

In the present project, a wide variety of aspects of these labyrinth-honeycomb seals are being researched in collaboration with two other institutes. The aim of the subproject is to investigate the mechanical properties of the materials used and, in particular, their deformation behavior at high temperatures and strain rates.

For decades, a variety of efforts have been made to develop metallic alloys for use under extreme conditions such as high operating temperatures, high pressures and / or in corrosive media.

The aim of the project is to establish a vacuum induction melting or casting process that enables the production of larger volumes with defined geometry of high-temperature alloys with melting points > 1700 °C. Microstructural investigations are carried out to reveal the interactions of alloy melt / crucible and alloy melt / casting mold. Mechanical investigations at the highest temperatures characterize the alloys investigated. 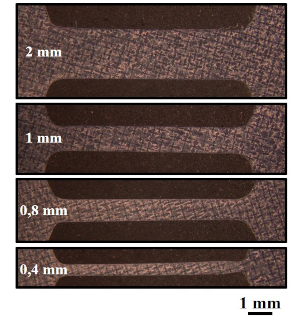 Inside turbine blades there are very thin and filigree partition walls between the complex cooling channels to ensure the use at high temperatures. Subsequent processing is no longer possible with these partition walls. Previous investigations already showed that a reduction in the wall thickness leads to a deterioration regarding creep properties. In order to predict the durability of turbine blades, it is important to quantify the influence of thin wall thicknesses on creep properties.

Within the DFG project GL 181/52-1 single crystal thin-walled specimens with wall thicknesses of 0.4/0.8/1/2 mm of the nickel-based superalloy MAR M247 LC are manufactured using the investment casting process. The single crystal thin-walled specimens are characterized regarding microstructure and creep behavior in order to investigate not only the influence of the wall thickness but also the influence of the cast skin. 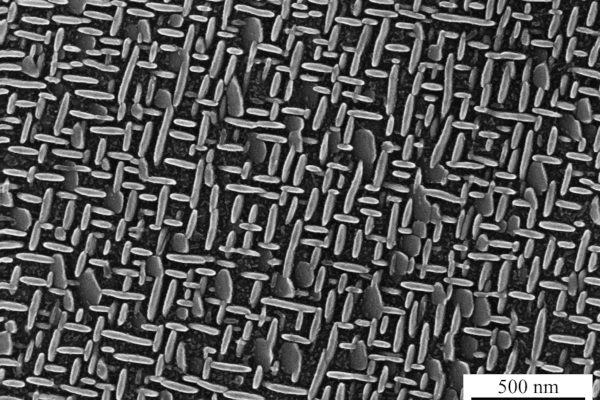 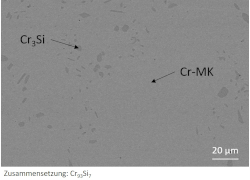 Chromium-based alloys are promising candidates for service temperatures above nickel-based alloys because they have a higher melting point and lower density. However, their disadvantages are low oxidation resistance and embrittlement by nitrogen at high temperatures, as well as a high transition temperature from brittle to ductile material behavior. Chromium, together with elements such as Si and Ge, forms the intermetallic A15 phase Cr3(Si,Ge), which exhibits very good creep properties at extremely high temperatures. Thus, mechanical properties can be adjusted by selective ageing. In addition, an improvement in the resistance to oxygen and nitrogen at very high temperatures is obtained.

The aim of the project is to develop a heat-treatable chromium-based alloy with improved oxidation properties and resistance to nitrogen at high temperatures and increased ductility at room temperature. 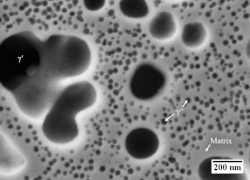 The cause of negative creep is compositional changes and a shift in the proportion of γ and γ′-phase. Topologically close-packed phases (TCP phases) are also suspected to promote contraction of the material.

The aim of the project is to separate the individual effects on a nickel-based superalloy by means of specific alloying changes and thus to investigate their influence on negative creep. 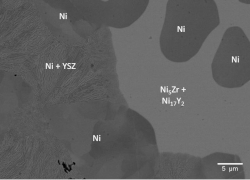 Internal oxidation is a special form of high-temperature corrosion. In this case, the less noble element in an alloy is selectively in situ oxidized. An extremely rapid internal oxidation can be observed in special ternary alloys such as the NiZrY alloy. This creates an alloy with oxidic patricels and metallic matrix, which is called metal matrix composite material MMC or oxide dispersion-reinforced alloy.

The aim of this project is to characterize the mechanical properties as well as the deformation behavior of these ternary alloys with extremely rapid internal oxidation. For this purpose, mechanical test methods are used on miniature samples at different temperatures and with or without prior internal oxidation.

An example of this is the tensile test of a NiZrY alloy that was not internally oxidized beforehand at 950 ° C in air. During the experiment, internal oxidation of the Zr and Y elements to form yttrium-stabilized zirconium oxide (YSZ) takes place far into the sample.

Al10Co25Cr8Fe15Ni36Ti6 (in at.%) as starting point for a high temperature materialHide 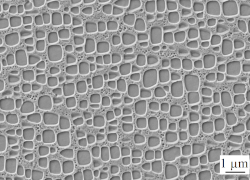 During the optimizations of the equiatomic alloy AlCoCrCuFeNi, one of the most investigated alloys from the relatively new group of "high entropy alloys", a promising material for high temperature applications with the empirical formula Al10Co25Cr8Fe15Ni36Ti6(at.%) has been developed. The microstructure here borrows from a structure known from nickel-based superalloys: Cubic γ'-particles are present to a relatively high volume fraction (~40%) coherent in a γ-matrix, which brings excellent mechanical properties at high temperatures.

In the course of the DFG project, various trace elements (Mo, W, C, B, Y, Zr, Hf) are added in small amounts (up to 1 at.%) to the starting alloy. By adjusting the alloy composition, as well as optimizing the heat treatment, the size and volume fraction of γ'-particles shall be further increased. To characterize the alloys, mechanical test procedures are carried out at elevated temperatures, and the corrosion and oxidation behavior is also investigated. 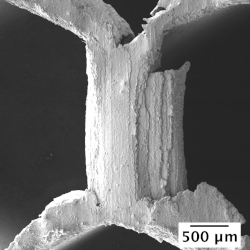 At our institute, we are intensively researching the rub-on processes in labyrinth seals. Why does it make sense to do research on this?

Approximately 2.5% of global CO2 emissions are caused by aircraft. At the same time the number of air travels increases, the emission of pollutants is strongly increased.

An ecological improvement in aircraft turbines can be brought about by optimizing the distances between the fixed and moving parts - moreover, this is not unattractive from an economic point of view. The distance between these parts is decisive for the level of fuel consumption.

A technically feasible solution is to reduce the leakage in the gas ducts by means of the wiper systems. Labyrinth seals (as a rotating component) in combination with honeycomb linings (as a static component) are the most commonly used wiper systems.When these components are used, the gaps can be designed to be minimal so that wiping occurs during transient operation.

The rotating tip of the labyrinth seal is usually the higher quality component, it must be fully protected. The static honeycomb linings, on the other hand, will seal during turbine operation due to the rotating seal tip. The preferential wear on the honeycomb occurs due to its thin-walled hollow body structure (or low solid surface area).

The rubbing processes in turbines differ from the other tribological systems by very high relative speed (from 150 to 450 m/s) and very low infeed of the rotor (from 1 to 1000 mm/s). The combination of these two parameters - (i.e. speed and the distance) can lead to extremely high stresses, strains as well as temperatures in the interaction area. The material properties of the components involved are central to this process.

The aim of the project of our chair and two other institutes is to significantly optimize the processes by a fundamental understanding of the rubbing processes between labyrinth seals and honeycomb linings. 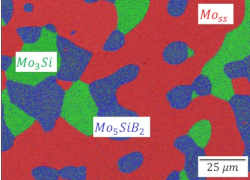 Mo-borosilicide alloys (Tm > 2000°C) are a potential candidate of future high temperature materials due to their good creep properties. The objectives of this project include the identification of suitable microalloying elements to improve the creep and oxidation properties, as well as the reduction of the brittle-ductile transition as temperature.

DFG grant to establish international collaborations on the above topic. 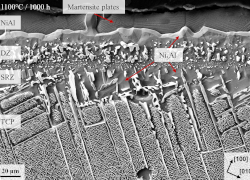 The creep and oxidation behavior of the nickel-based superalloy PWA1484 is investigated. Special attention is given to the testing of thin specimens with a maximum thickness of 1.0 mm. The specimens were uncoated or alitized. The oxidation experiments were carried out stress-free for up to 1000 h at temperatures of 980°C and 1100°C in air.
The alitized samples show a small oxide layer of about one micrometer, and after prolonged aging at high temperatures there is an increased formation of TCP phases. These phases have a needle to plate-like structure and extend far into the original microstructure. In addition, the NiAl coating transforms into a martensitic structure.
Uncoated and alitized specimens were tested in creep tests at temperatures of 980°C and 1100°C with stresses up to 170 MPa in air. Both the uncoated and alitized specimens showed a large scatter in fracture time and strain rate at a temperature of 980°C regardless of specimen thickness. The thickness effect was not observable. However, at temperatures of 1100°C, the thickness effect was clearly measured for both types of specimens. The scatter of fracture time and minimum creep rate is small.

Influence of thin wall on high temperature properties of nickel base superalloys.Hide

Corrosion of metals in contact with liquid glass Hide